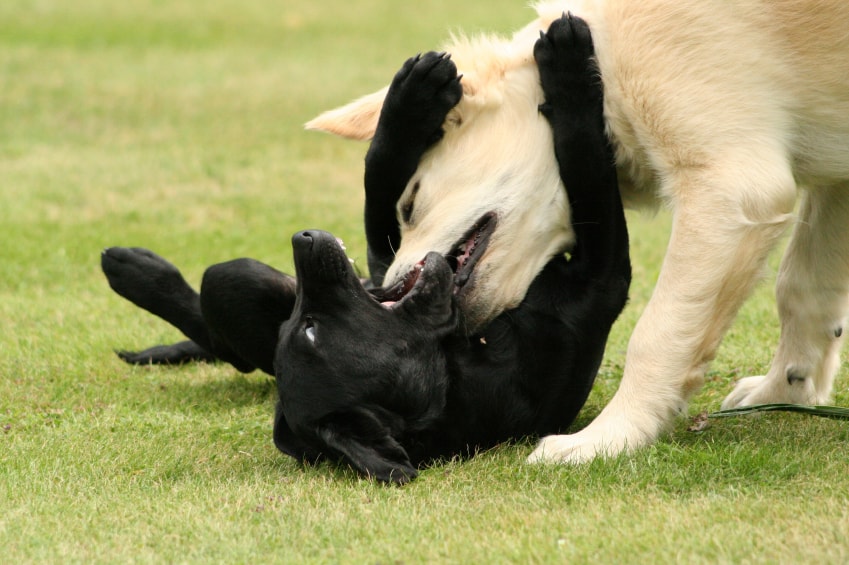 Understanding Problems Between Dogs in the Home

Problems will often arise when bringing a new dog into the home.  It doesn’t really matter if it is a puppy or adult dog, it will likely cause at least some sort of disruption.  These disruptions are often temporary and natural as long as they are handled appropriately by the owner.  Problems that are often encountered when bringing home a new dog are, marking, destructive behavior, aggression, and excessive vocalization. There are some things that you can do to reduce the likelihood that you will have problems when introducing a new dog or puppy into your home.  First, be sure to choose a dog or puppy that will be compatible with your existing dog or dogs.  Be sure that the energy level of the new dog will likely match that of the current dogs to reduce problems.  Sex is not generally as important a factor as most people think and overall temperament will be the key factor.

If possible, introduce the dogs on neutral territory.  Have them meet at a local park or other place away from your home where neither dog will feel as though they have “ownership” in the area.  You can also use a crate when introducing a pup or dog into the home.  Have the new dog spend some time in the crate while the other dog(s) are free in the house.  After some time, switch and allow the new dog the freedom to explore the house and become more comfortable without the interference of the existing dog(s).

Whatever you do, be sure that all of the dogs, including puppies, get ample physical activity and mental stimulation.  Regular walks will help immensely as well as productive mental stimulation. You are less likely to have problems between dogs that are tired.

Be sure not to show too much attention to either dog and this will often reduce problems.  Owners often spend too much time with the new dog in their home in hopes that they will feel more comfortable.  This is often counterproductive in that the existing dogs will notice that the new pup or dog is receiving all the attention and will likely act out. If you are experiencing problems between dogs that have lived together in the home for some time it is likely the result of a change.  This change can take on many forms and are often difficult for dog owners to recognize.  Some common changes that can occur often revolve around changes in the environment, changes in people living in the home or changes in routine.  For example, many dog owners see problems between dogs develop soon after the arrival of a newborn.  Often, this is a result of a change in schedule for the dogs in that their routine is disrupted and they are often not exercised as much as before the arrival of the baby.  Relocating to a new home is an environmental change that can also cause problems between dogs.  As you are busy unpacking all the boxes from the move, the dogs are often missing out on their regular walks and visits to the dog park.  If you are expecting a change in your home, be sure to keep your dogs in mind during the change so that you don’t see disruptions that lead to problems.  If you are having problems between dogs in your home and are having difficulty understanding why or can’t effectively resolve the problem, you may need to enlist the advice of a professional trainer.

At Highland Canine Training, LLC, we specialize in rehabilitating behavior problems and helping dog owners resolve problems with their dogs. If you need help or advice with resolving problems between dogs in your home, please feel free to call us at 866.200.2207 or email us at training@highlandcanine.com. We offer free in-home evaluations and offer affordable and effective solutions to all dog behavior problems. This article is the seventh in a series of information on Treating Dog Behavior Problems. Be sure to follow the links below to learn more about the topics in this series.