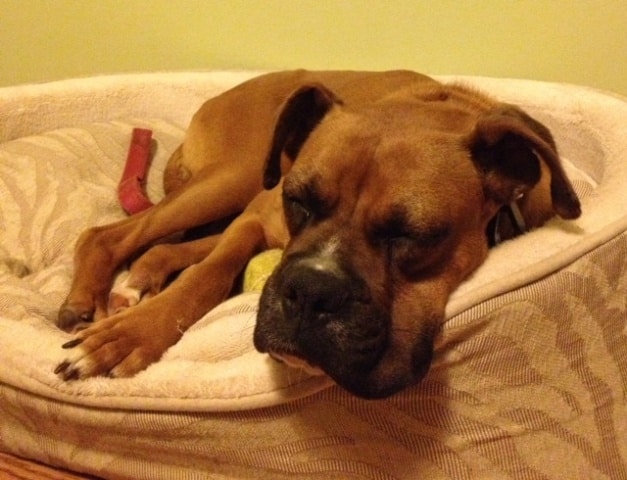 We received a call from a couple in Virginia in reference to rehabilitating a fearful dog.  It was their Boxer, Sadie.  According to the family, Sadie had been running in the woods near their house for some time, and after months of feeding her and offering delicious treats, they were finally able to corral her.  The couple immediately fell in love with her and wanted some help with getting her socialized and trained in basic obedience.  We invited them down to Highland Canine Training’s Corporate Headquarters in North Carolina so we could take a look at Miss Sadie.

The couple was so patient with Sadie, and wanted nothing more than to hug her and show her affection.  Sadie; however, was not on board with this idea.  Once she was in the kennel, they were still unable to touch her.  As they opened the door to their SUV, there stood an adorable doe-eyed Boxer with little white toes, who was terrified at this group of trainers huddled around to get a peek.  Once we placed her crate on the ground, we were able to touch her.  It felt like petting a stuffed fox at a taxidermy shop she was so stiff.  Sadie was rigid from a lack of human interaction throughout her short life to the point of paralysis.

We told the couple their only option was to leave Sadie with us for several weeks.  Sadie needed near constant interaction with humans and new dogs, and this was not something that could be done intensively through group classes or private lessons. With only a little hesitation, they agreed although leaving Sadie was the last thing they wanted to do.  We began the work of slowly and gently rehabilitating this fearful dog.

Two days after Sadie was entrusted to Highland, she was still petrified.  She refused to relieve herself although she was given ample opportunities.  Finally, one day, while she was out on a long line in a fenced yard, Sadie was able to go potty.  It was a two-man job to take Sadie out for breaks.  One person carried the frozen girl, while the other person opened the doors and gates for her.  Sadie was always taken out on two leashes lest she try to run away; something she did with regularity when she first arrived.

Sadie found a comforting presence in Aspen.  Aspen, a white German Shepherd, was the office boss at Highland.  Aspen made Sadie feel safe.  He accompanied her on her trips outside, and she relaxed visibly in his presence.  Aspen was very patient with her, even wearing her as a hat on occasion.  Yes, Sadie planted her bottom squarely on his head from time to time so she could be as close to him as possible.

It was the calm, gentle energy of a child to finally convince Sadie it was okay to take food directly from the hand of a human for the first time.  A new group of students arrived at Highland within a week of Sadie’s arrival, and turned her world upside-down again.  One student managed to help this sweet dog learn to trust that we were there to help her, not to hurt. We have had many small breakthroughs with Sadie.  She now goes out regularly on a six-foot leash without Aspen, and without pulling to get away from her human trainer.  She moves voluntarily in and out of her kennel when it is time to eat or rest.  She eats her food, takes treats from people’s hands, and socializes with other dogs and people.  She accepts the touch of humans, and even seeks it out on her own from time to time.  She runs with the other dogs in the office, and thoroughly enjoys boxing them.  We cannot wait to see what new breakthrough she will have next.

Sadie still has a long way to go, and will be here for several more weeks.  Rehabilitating a fearful dog takes time.  We are so proud of her baby steps toward becoming a happy dog that can receive and give love and affection in our human world.

If you need help with rehabilitating a fearful dog, or with any other type of training, please do not hesitate to contact us via email at training@highlandcanine.com or by telephone at 866.200.2207.  We look forward to hearing from you!