If you were asked what comes to mind when envisaging a “service dog,” what would you see?

To many, a service dog is a Labrador leading the blind; a goldendoodle pulling a wheelchair; a retriever picking up a pair of housekeys and placing them in the hands of their mobility impaired handler.

A service dog is an incredibly valuable tool for an individual living with disabilities which make it difficult to accomplish certain tasks on their own. A properly trained service dog can work wonders for a family by relieving some of the pressures which parents of a disabled child face daily, while allowing their children to begin experiencing independence which they would be unable to without their service dog.

What Is A Service Dog?

According to the ADA (Americans with Disabilities Act), a service dog is defined as:

“Any dog that is individually trained to do work or perform tasks for the benefit of an individual with a disability, including a physical, sensory, psychiatric, intellectual, or other mental disability.”

The Americans with Disabilities Act was originally developed in 1990 to protect the civil rights of disabled individuals. The act has been amended since then to remain relevant to social reformation, but its purpose remains the same: to help eliminate discrimination regarding disabled individuals while supporting that which helps them gain and maintain their independence.

Why Are Service Dogs Beneficial For Their Handlers?

• Opening and closing cabinets, doors, and refrigerators for those who are living with disabilities such as cerebal palsy, muscular dystrophy disorders, paralysis and more

• Guiding the blind and helping them navigate safely

• Alerting to auditory signals (such as phones, doorbells or smoke detectors) for the deaf or hearing impaired

• Reminding an individual when it is time to take their medication

• Detecting the dropping insulin levels of an individual with diabetes

And of course, many more reasons! There are many people who truly require their service dog just to function in daily life, and a dog tasked to such an important job must be reliable, consistent, sound of mind and completely devoted to their work. A poorly trained service dog is a danger to their handler, and can be a danger to society.

To avoid potential discrimination while ensuring that all disabled individuals have access to service dogs, the ADA does not require service dogs to be licensed, certified or trained by any specific agency. The leniency in these laws has unfortunately resulted in an ever-growing population of pet dog owners taking their pups into facilities where only service dogs are allowed.

"But My Dog Provides Emotional Support!" 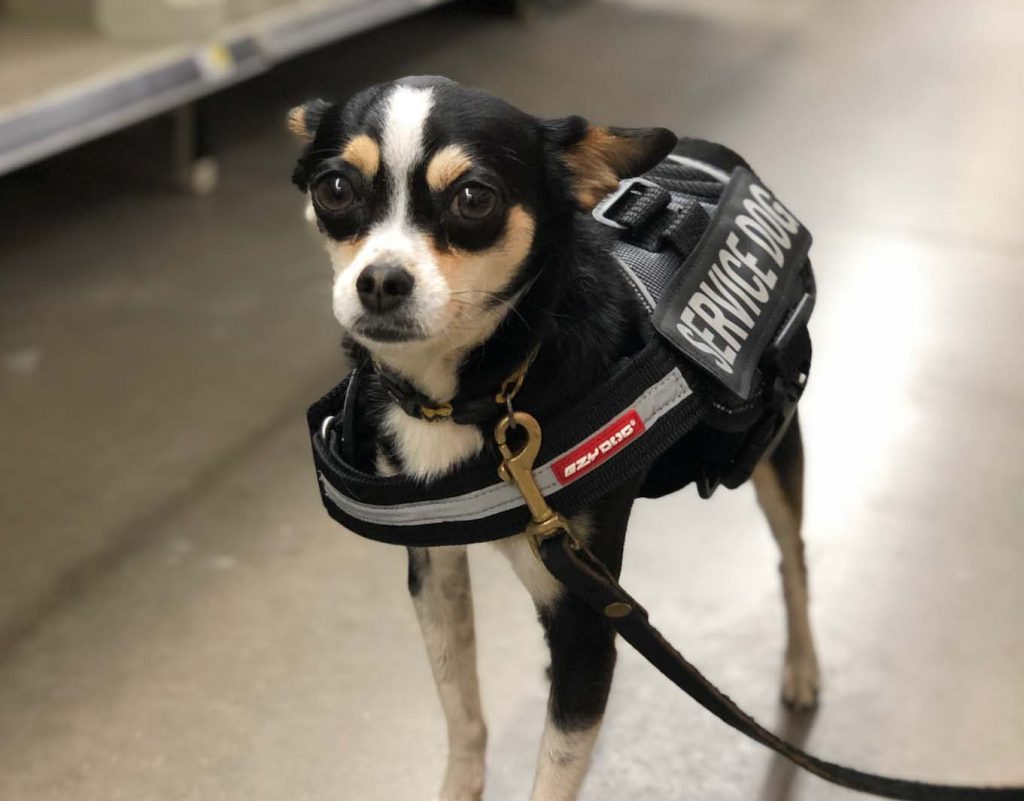 Emotional support animals (ESAs) – typically dogs – are pets who may help to calm individuals with anxiety or cheer those experiencing depression.

Typically, a pet can be registered as an ESA with the help of a psychologist or psychiatrist (who provides written verification that this pet does indeed improve one’s mental state), but ESAs are not trained to perform specific tasks for their handler. Therapy dogs provide comfort to large groups of people and typically require the verification of each individual facility they are working in (such as hospitals, schools or nursing homes) prior to entering.

Neither ESAs or therapy dogs are service dogs. Service dogs are trained to help one, specific person with very particular tasks. The reason why service dogs are allowed entry into many places where ESAs, therapy dogs and pet dogs are not is because their handlers genuinely require them simply to function properly. Separating a handicapped individual from their service dog will likely result in a significant increase in the difficulty of tasks for that person, in addition to being downright dangerous in certain instances.

Most people can appreciate the universal psychological and physical benefits that owning a dog can offer, but service dogs provide much more. Not every dog has the mental capacity or temperament necessary to become a service dog, so service dogs are thoroughly tested and specifically selected for their work. Unfortunately, even the best candidates can “wash out” of their program for a number of reasons, leaving only the dogs who consistently perform exactly as required in a wide variety of settings.

Although a pet dog may possess a strong attachment to its owner, many disabled individuals must attain a separate service dog specifically selected and trained to help them. We typically do not train pet dogs to be service dogs for a number of reasons, some of which include:

Remember, a service dog is a tool – not an accessory.

How Do I Identify a “Fake” Service Dog?

At this point you are probably wondering, “Okay – I know what a service dog is, now what is it not?”.

The topic of “fake” service dogs is something which is becoming increasingly more frequently discussed and controversial throughout our society. Some states are even passing legislature punishing individuals who dishonestly bring their pet in a “no pet” zone by falsely claiming that that their pet dog is a service dog. The legal consequences currently include everything from fines to criminal charges, and are becoming more serious as the issue occurs more often.

How does someone get away with ordering a service dog vest and modeling it on their pet in the middle of Walmart on a Saturday afternoon? The ADA does not require service dogs to be certified by any licensing agency or registry. Forcing disabled individuals to license their service dog would technically be discrimination and could make it significantly more difficult for people who genuinely need service dogs to get them.

The ADA also does not require service dogs to be trained by a professional organization as the price of a professionally trained service dog can be substantial, and unaffordable for those who do not have access to this kind of funding. Service dogs can consequently be trained directly by their handler; however, they must still abide by social etiquette standards. Any facility is legally allowed to remove a service dog if it:

• Becomes unruly and distracting to other patrons.
• Poses a threat to others through the demonstration of aggressive behaviors.
• Becomes destructive to property.
• For any reason fails to be under the control of or supervised by its handler.

Generally, it will be easy to recognize a “real” service dog by their focused, disciplined, non-reactive behavior. Service dogs should not be easily distracted, dragging their handler against their will or leaving their handler to visit everyone they pass. They also should not react aggressively to other dogs or people and should be clearly focused on doing their work. Most pet dogs, unless impeccably trained, will not be a shining example of these behaviors.

The increasing demand for service dogs, alongside the recent ‘trend’ of individuals wanting a service dog of their own, has resulted in the unfortunate development of scam service dog companies. These companies will usually attain a plethora of easily acquirable dogs, usually without temperament testing them or setting any standards for their dogs, and sell them for thousands to individuals who really need a service dog. If clients are lucky, their “service dog” may have some basic obedience training, and hopefully will have been socialized in more environments than the kennel they are coming from.

Many of the “service dogs” being sold by these kennels cannot perform any of the tasks necessary to help their owner and have caused serious disruption in their new family’s home. From a complete lack of potty training to literally mauling the family’s pet dog, these companies charge thousands for a service dog and then send families home with a menace.

Can you spot one from the other?

Service dogs are one of the most valuable tools that many disabled individuals can possess. They provide assistance, independence and comfort while enabling their handlers to achieve things they may never have done otherwise. The abuse of service dog privileges by those who simply want to have their pet with them on their morning shop is causing people to react negatively to genuine service dogs. Unfortunately, this is making it significantly more difficult for disabled people to navigate the world with their service dog due to the interrogation and disrespect many handlers experience while in public.

It is not difficult to differentiate between a real service dog and a “fake” service dog once you understand what exactly a service dog is. Watching these dogs work should be an incredible and inspirational experience – not one that makes you want to flee in the opposite direction.