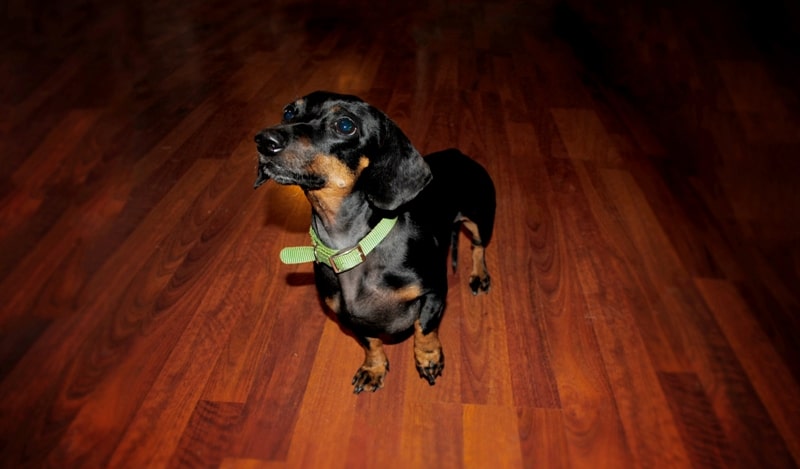 In a classic case of a Dog Destroying a House, a Miniature Dachshund proved to have other problems

Misty is an adorable black and tan Miniature Dachshund that came through our Second Chance Program recently.  Misty, with her huge doe eyes, extra-long body and the shortest legs ever, looks much like the “Weenie Dog” often depicted as a cartoon character!  Misty came to us through the All American Dachshund Rescue, a group that we have trained a number of Dachshunds for over the past several years.  She originally came from a hoarder house and was adopted out rather quickly, but returned almost as quickly.

Rescue dogs can often difficult to understand; mostly because you never get the entire story from the original or previous owners.  Another task in rehabilitating them is the job of undoing the bad habits that got them surrendered to a shelter or rescue in the first place.  In Misty’s case she came from a hoarder house and from a dog trainers perspective animals seized from hoarder houses are some of the most difficult cases to rehabilitate because the dog’s trust in humans is often destroyed.  Many dogs from these situations have had little to no human contact, were forced to stay in horrific conditions, including kennels filled with feces, urine and even other dead animals. Dogs from hoarder houses typically take months if not years to rehabilitate, but it’s worth the time to watch these hopeless souls earn back the trust of humans! Misty was adopted out to a great home with the best of intentions to provide Misty with the best home possible.  Unfortunately, Misty had some unexpected issues.  Her desire to promptly annihilate furniture and other fixtures in the home was an issue no one was prepared for.  After destroying furniture and other items to the tune of thousands of dollars as well as the frustration with her potty training……Misty was returned to the rescue group.  The All American Dachshund Rescue did not want to give up on Misty, so a group shuttled Misty to us in North Carolina all the way from Alabama with the hopes of diagnosing and resolving the destructive behaviors of the adorable Dachshund.

Misty immediately showed the classic signs of lack of socialization with humans: tail tucked, rigid posture, shaking when touched or held, not eating treats from our hands, lack of eye contact and running when we tried to pick her up.  Misty was also really skinny and her coat lacked any luster and shine.  Misty stayed in our office area for weeks so she could be around people constantly.  We began to notice that out of nowhere Misty would jump on the couch and begin demolishing it with a tenacious vigor.  She would also apply this same behavior toward, packages, book bags, pocketbooks or anything else that she felt no one was watching.  The mystery for our trainers was there didn’t seem to be a clear trigger for the destructive behavior. Misty was never left alone, she wasn’t playing with other dogs, and in fact, she slept about 20 hours a day which was strange for a 3-year-old Dachshund.

After a few weeks of observation we took Misty to Iredell Companion Animal Hospital to pay a visit to Dr. McCurry.  The first guess was that she had some sort of thyroid issues, so we sent off blood work…..that wasn’t it.  After a few days of pondering, Dr. McCurry tested Misty’s cortisol levels……. JACK POT!  Misty was soon diagnosed with Addison’s disease, which is an endocrine system disorder that occurs when the adrenal glands fail to produce enough hormones for normal function. Apparently, Misty always felt hungry, had no energy, and of course it affected her skin and coat. Misty’s destructive behavior was linked to her health issues. Our professional dog trainers are still working with Misty and her destructive behaviors are much better, but not gone completely.  We are also still working on trust issues with humans but are proud to announce that she is house broken.  Misty is progressing every day and we are thankful for the opportunity to work with her.