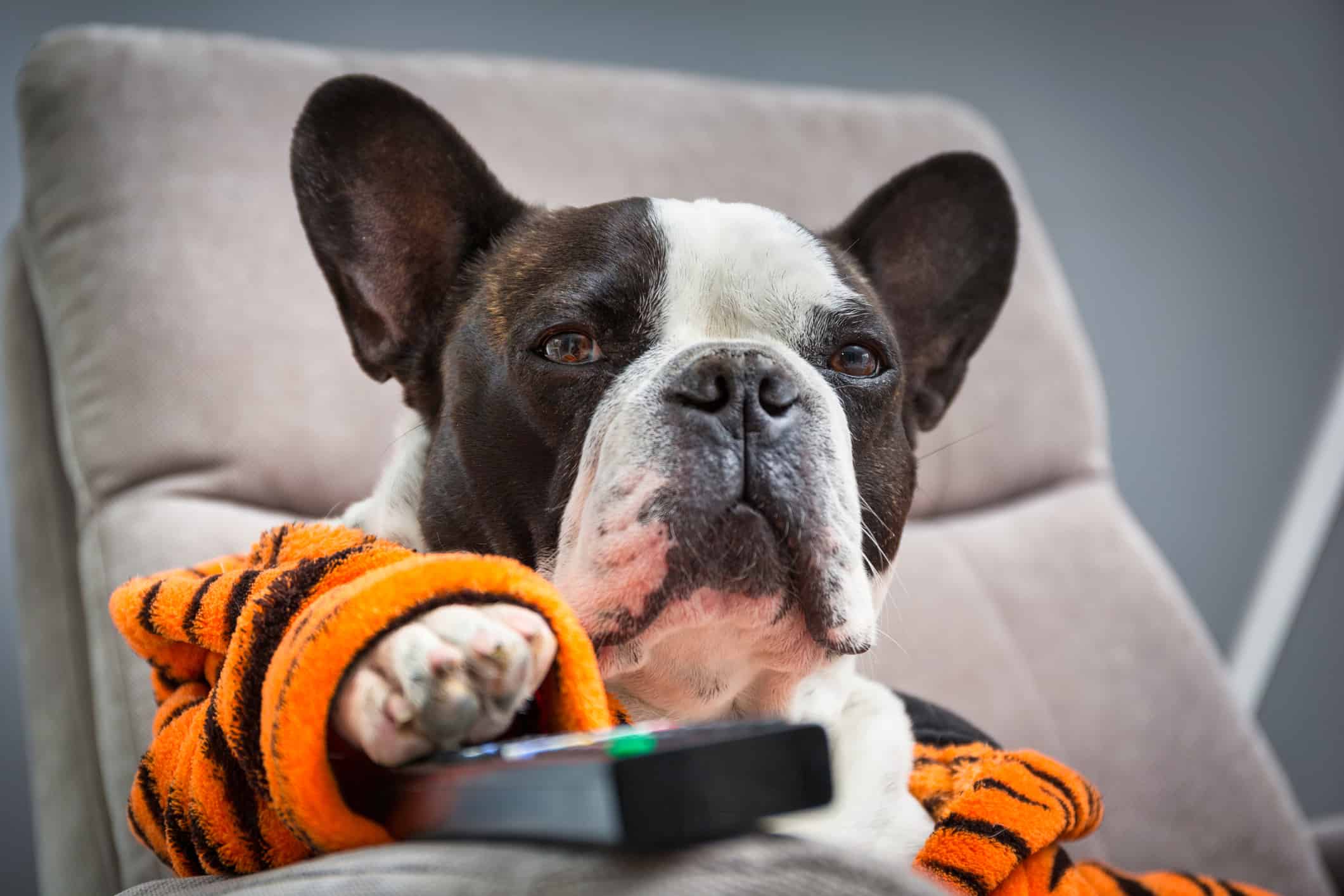 We’ve all been there, right? Picture the scene.

You’re relaxing on the couch binge watching your favorite Netflix series, when out of nowhere, something appears on the screen that triggers your dog into a relentless frenzy of animated barking. This ensues for a few seconds, before your pup swiftly returns to whatever activity it was doing before.

It makes you wonder – do dogs watch TV? Do they comprehend what they’re seeing on the screen? How do they interpret the things they’re seeing on the TV, and why might one dog react differently to another? Do dogs actually care what we watch on TV – for example, do they wish we’d stop watching popular shows like The Crown (corgis aside, of course) in favor of more dog-centric shows?

In this article, we’re going to dive into this topic and understand the relationship – if any relationship exists – our dogs have with our TVs.

How do dogs see TV?

The starting point for this topic is to understand that there is a significant difference between the way your dog interprets the vision and sound emanating from a TV screen, and the way humans do. In fact, your dog sees the whole world differently – not just the one on your TV.

You may believe that dogs only see the world in black and white – but this is actually untrue. There are, however, differences in the range of colors that dogs can see when compared with a human. Dogs are dichromatic, seeing the world in yellow, brown and grey tones; humans are trichromatic, meaning we have three classes of cone receptors to interpret a wider range of light wavelengths. Some animals, including birds, fish and some insects, are tetrachromatic, having four or more types of cone cell.

Dogs also hear differently to humans. Their hearing is far more sensitive than ours – they can hear sounds which are four times further away than humans can and can hear higher frequency sounds, too. Humans cannot hear sounds that vibrate at greater than 20,000 Hz; dogs can hear sounds up to 50,000 Hz.

These differences mean that the way your dog interprets the pictures and noise from the TV differently to humans. They cannot see the same range of color, and their hearing is much more sensitive. 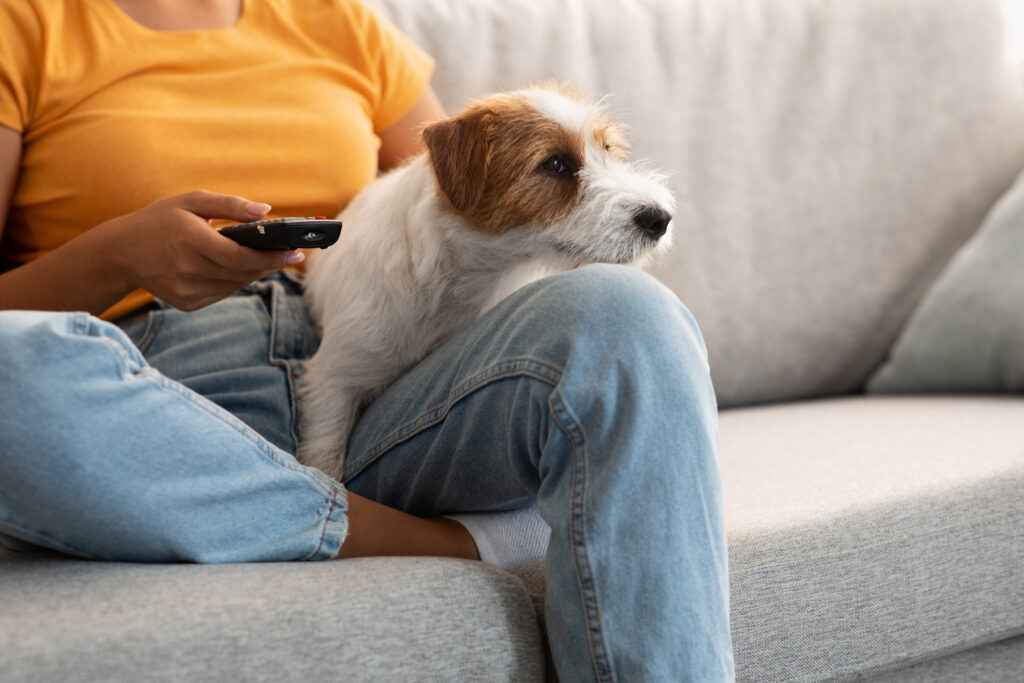 Although scientists and researchers will always try to answer even the most difficult of questions, they have yet to come up with a determination as to whether dogs actually like watching TV.

From the habits observed when a dog interacts with a television, it is clear that there are some differences to the way humans engage with it:

In addition, a research study concluded that dogs do not have a preference when presented with three different screens, each showing a different TV program.

This is a hard one to answer definitively, because it is impossible to truly understand the thought process for dogs when they’re interacting with images displayed on a TV.

When a dog sees something on the TV that attracts their attention – for example, another dog or animal in motion – we may instinctively believe that dogs think what they are seeing is real. However, given that dogs experience the majority of the world through their noses, perhaps the reason they do not interact for longer than a few seconds is that they are almost immediately aware that the images they are seeing on the screen are not present in the room with them – because they cannot smell them. 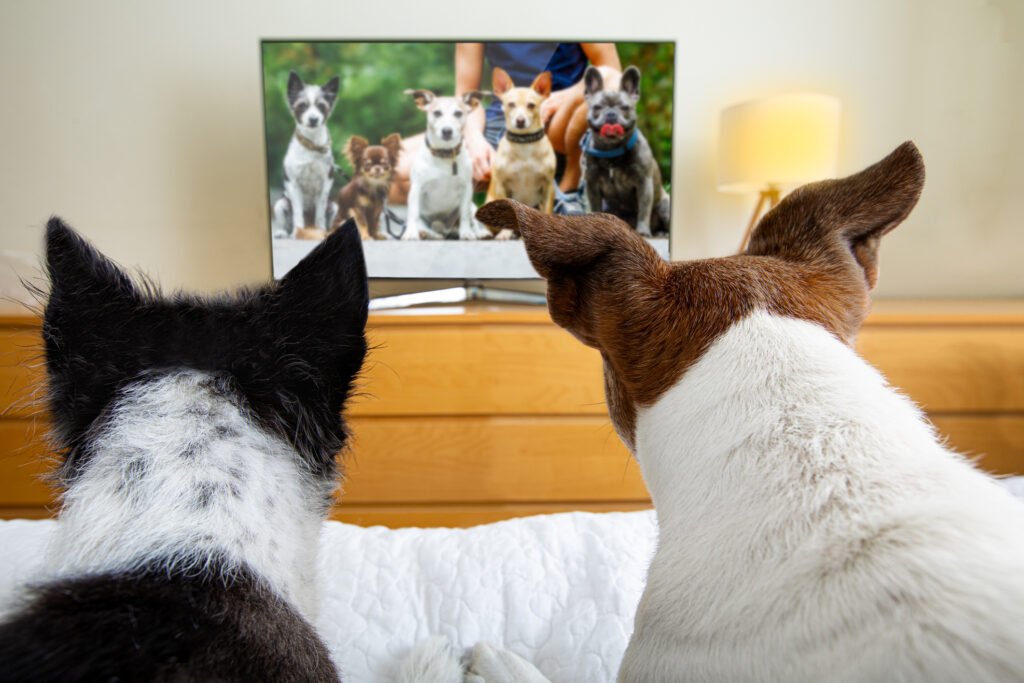 In recent years, there has been a marked increase in TV channels specifically aimed at your pup. The programs on these channels typically feature other dogs playing or running around, with high-pitched sounds to attract and keep the dog’s attention.

It is unclear whether these channels are actively watched by dogs. A more likely scenario is that they are used as background noise by dog owners when they have to leave the house and want to put something on the TV to occupy their dog’s attention. These channels may also potentially be watched by humans who want to spend time watching curated, cute videos of dogs, without having to actively scroll through YouTube or social media to find them.

So, should you leave your TV on for your dog if you leave your home? If the TV is left on 24/7, your dog will likely become desensitized to it – particularly as it will not be able to smell or otherwise interact with the pictures it is seeing. Every dog has different hobbies and interests, but it is likely they will get more joy from an activity that brings them mental stimulation (e.g. a dog puzzle or chew toy) than curling up on the couch specifically to watch TV. 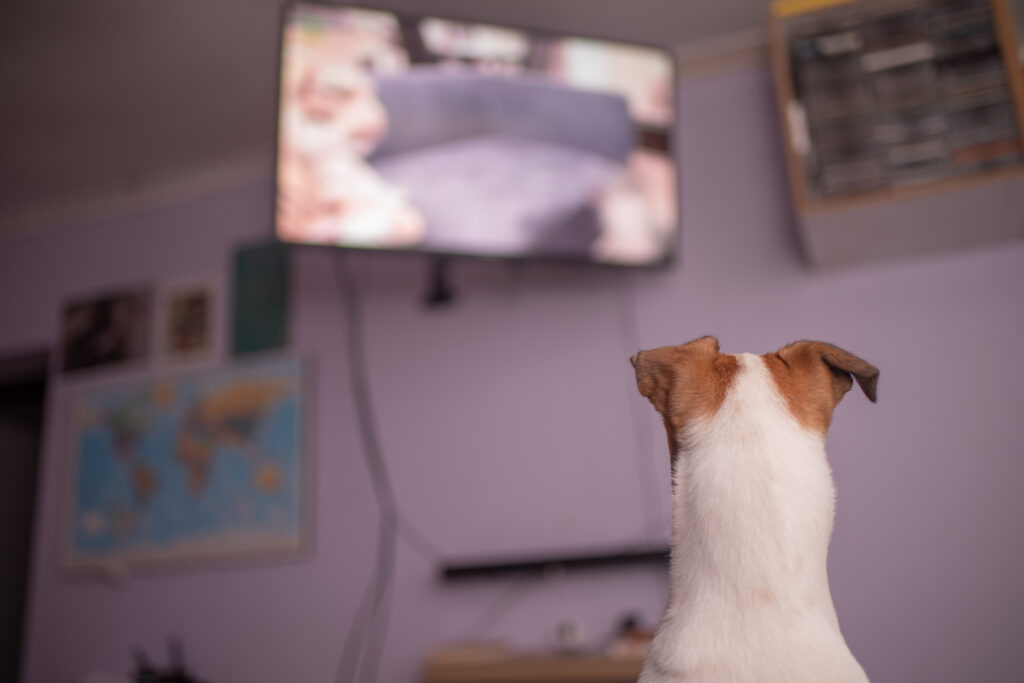 A 2020 Rover survey showed that almost 60% of respondents said their dog has a favorite TV show; concluded that action and comedy were our pup’s favorite genres; and that 40% prefer to watch TV shows or movies with their pup instead of the humans in their life.

As humans, we have a tendency to anthropomorphize our pets, where we attribute human characteristics to their behavior. It could be that the relationship between our dogs and the TV is overstated. After all, when we get into the realms of thinking about the genres they enjoy, we should probably realize that it is unlikely that our dog is going to be signed up as a Rotten Tomatoes critic any time soon.

However, sitting down to watch a movie together is a common family activity – and for many of us, our pets are undoubtedly a key member of our family. Companionship and relationship building is vital to a healthy human-canine dynamic. So even if there is little scientific study behind this topic, there is likely to be nothing wrong with breaking out  couple of treats, curling up with your dog, and enjoying a relaxing movie night together.