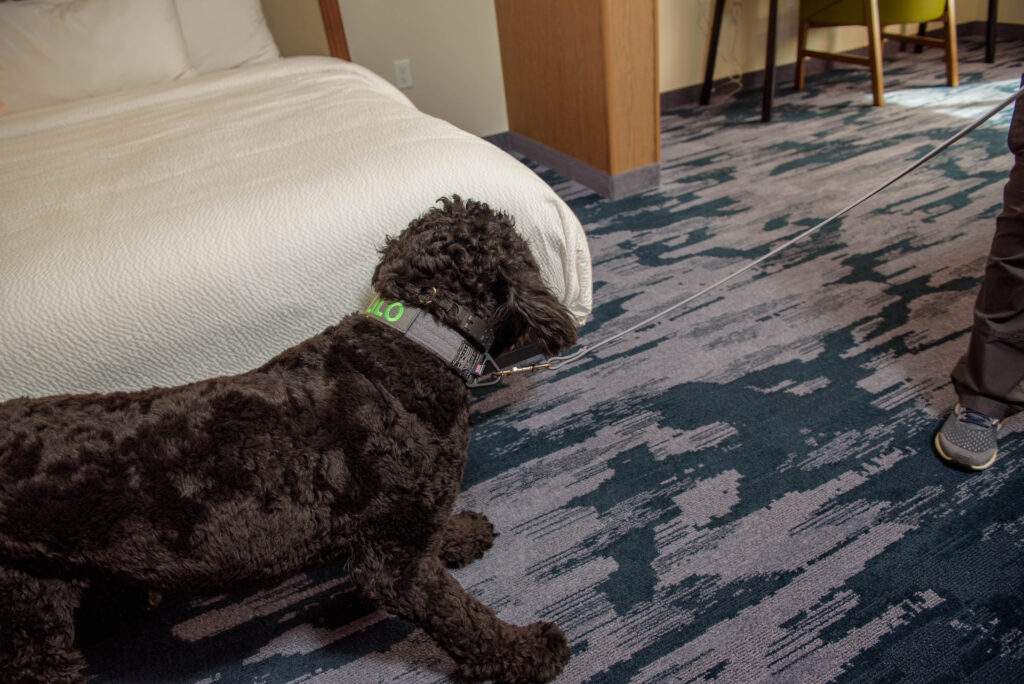 Bed bugs are an increasingly frustrating problem for property managers or businesses providing accommodation, such as hotels. Enlisting the help of a fully-trained bed bug detection dog can help avoid the damage to reputation and bad publicity often associated with bed bug complaints.

All over the world, canines are utilized for a broad spectrum of tasks. We have working canines to assist the disabled, to herd livestock and for personal protection. The list goes on. However, one task the canine really excels at over any human being and all other species, for that matter, is odor detection. These trained dogs have the ability to perform quick and accurate searches for anything with an odor. We use them because it is a fast, reliable, safe and non-invasive method of detecting or locating anything we desire. Detection canine teams are deployed in search of narcotics, explosives, human odor, and currency to name just a few.

Well-trained bed bug sniffing dogs enjoy remarkable rates of success and, as a result, the demand for these detection canines for any odor is on the rise. And, since we continue to make use of these dogs and their remarkable accuracy, it only makes sense that we train and put to work canine teams to find odors as common as narcotics and less common such as…bed bugs!

A short history of bed bugs

Bed bugs have been plaguing humanity for centuries. Whilst excavating in the 1990s, archaeologists identified fossilized bed bugs while excavating a 3,550 year old site. They even appear in several plays by the Ancient Greek writer Aristophanes.

Bed bugs remained throughout history although, after railroad transportation became a major method of commuting, they really began to thrive and multiply at an impressive rate. Hotels along major railroads were always booked and became a hotspot for bed bug transmission. Bed bugs would crawl into customers’ luggage and then be transported all across the world to continue breeding.

This pattern of bed bug expansion continued up until World War II when along came a pesticide called DDT used to kill typhus and malaria. This pesticide was also successful at terminating bed bugs and numbers began to dwindle over the next 30 years. The use of DDT was eventually prohibited for health reasons and since then bed bugs have made an extraordinary comeback worldwide. 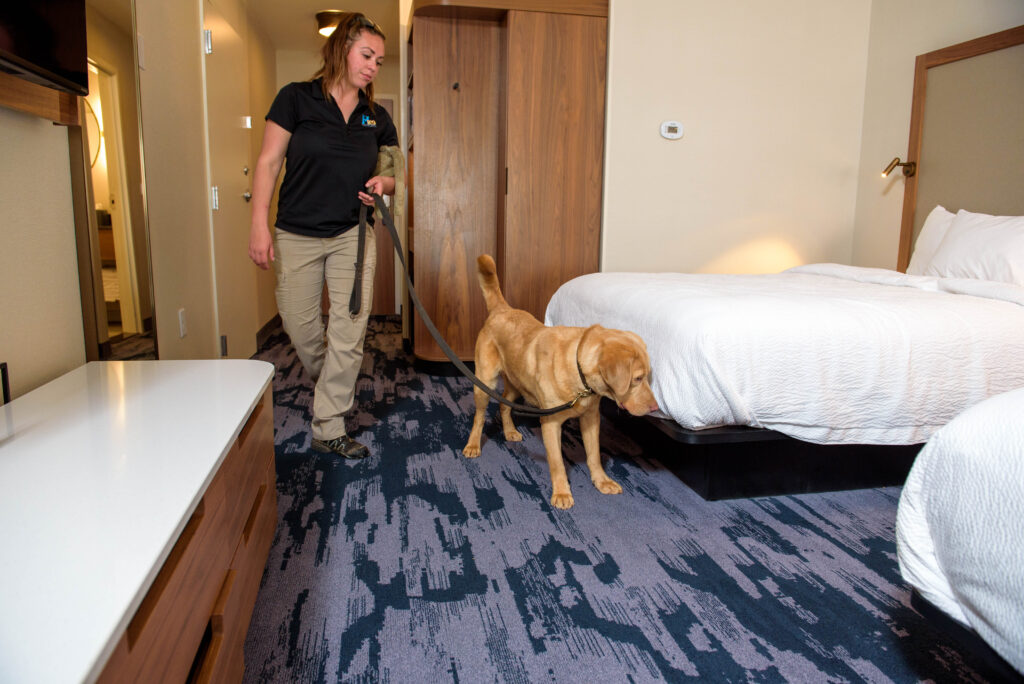 Bed bug reports are on the increase

The developed world is ideal for bed bugs to live, breed and flourish. Some recent facts from the National Pest Management Association include:

Pest exterminators also reported that bed bugs are the most difficult pest to control – significantly more so than ants, cockroaches or termites.

Are bed bugs only found in beds?

Do not let the name “bed bug” deceive you. Although they are often found in mattresses, they also take up residence in carpets, cracks in the walls or anywhere it is dark and warm. With the ability to crawl through walls and along pipes and wiring it is no wonder they spread so readily. They crawl onto clothes and luggage undetected and act as hitchhikers from one location to the next.

Symptoms of a bed bug bite include itchy red marks or welts on the skin, often times in a line or zigzag pattern. Some people do not even notice when they have been bitten as they have no reaction to the bites. A bed bug bite is not dangerous and is easily treated. The biggest risks that arrive from bed bugs is the bad publicity they will inevitably bring to a business or landlord once discovered. One complaint made public on social media can cripple a business and bring all profit to a grinding halt. Due to the nomadic nature of bed bugs, no business or residence is safe from a potential infestation. From airports to public libraries and restaurants, bed bugs do not discriminate on where they choose to reside.

Attorneys have become wise on the subject of bed bugs recently and are beginning to specialize in “bed bug law”. They have become aware of how prevalent bed bug infestation is and are offering their services to people who have been affected by bed bugs. These attorneys assist people in obtaining more than reasonable compensation from their “bed bug attacks” at hotels and holiday destinations as well as offices and work places. They also assist tenants and new home owners if they have moved into a residence infested by bed bugs. They are advising clients to have their properties checked both before selling their property and/or buying a property. With the potential legal and financial consequences of a bed bug infestation for a business or home owner, it is starting to make sense why calls to exterminators have tripled in the last decade. People are realizing that funding early detection and extermination of bed bugs in their home or business will work out cheaper and easier for everybody involved in the long run. 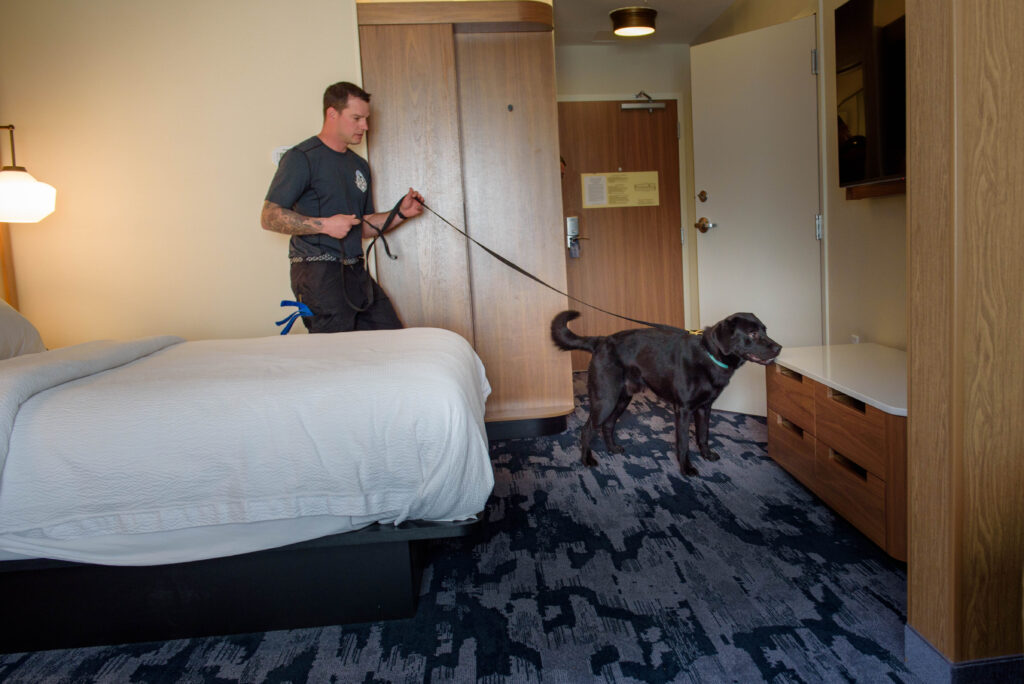 How to check for bed bugs

There are multiple methods of detecting a bed bug infestation. These include a physical human search, mattress encasements and placing bed bug inception devices. These methods can indeed find bed bugs but a lot of the time they are not effective and can miss an obvious bed bug problem.

A human search will miss bed bugs residing within cracks in the walls, floors, and under carpets. They won’t find bed bugs living in power sockets and will miss bed bug eggs as they are too small to see. A mattress encasement is indeed effective for finding bugs located in a mattress but unfortunately has the same issues as a human search and will miss the rest of the building. Bed bug inception devices also work but do so by chance and, just because there are no bed bugs in the device when it is checked, does not mean infestation can be ruled out indefinitely.

This is where a well-trained bed bug sniffing dog will not be beaten. A canine has the ability to search an entire room within minutes, profiling the whole area in extreme detail. High or low, no matter where they dwell, the canine’s superior nose will be able to locate and pinpoint where bed bugs have settled. Fine details will not be missed and they are completely non-invasive. If there are bugs in the wall the canine can inform you without having to make a hole, for example. 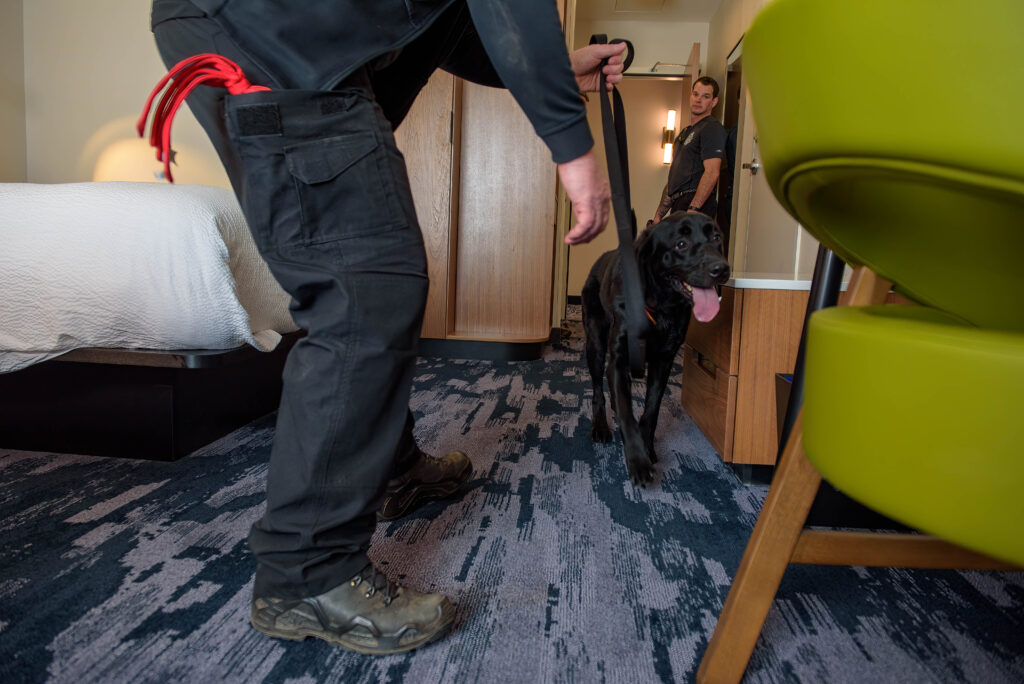 How accurate are bed bug dogs?

Bed bug detection dogs are increasingly being considered the most effective way to detect if a bed bug infestation exists. According to a study from the University of Florida, a properly trained canine has a 98 percent success rate of sniffing out bed bugs. The same report states that even a single live bug or egg can be detected with 96 percent accuracy.

As bed bugs continue to multiply, so is the need for reliable detection dogs. Using canines is a more attractive option for most people because they are quicker and more accurate, however there are simply not enough dogs to keep up with the problem. The bed bug detection industry is booming and, in 2017, the revenue generated by the pest control industry specific to bed bugs was $644.7 million dollars. Some exterminators have their own detection dogs however individual bed bug sniffing dog teams do exist and are becoming extremely popular. It is not uncommon for business owners to be booked out weeks in advance to conduct searches for bed bugs. If bed bugs are found and the problem is addressed, the dogs will always be called back to see if the extermination was effective.

At Highland Canine Training, LLC, bed bug detection dog training is something we perform on a daily basis. We are aware that there is an evolving demand for well-trained bed bug sniffing dogs and we work hard to ensure that our dogs perform to the highest standard. We take the imprinting and training of our bed bug detection dogs as seriously as we do our explosives dogs. We understand that a dog that will falsely indicate or miss a bed bug infestation can result in unpleasant consequences for a business.

To put it simply, our dogs are passionate about finding bed bugs because our trainers are passionate about training them. We take pride in our product and endeavor to make sure a new handler takes pride in it as well. We achieve this by supplying a handler course upon an order of our detection dogs. We will train the handler as meticulously we did their canine so they become a competent and confident team. We always strive to supply the best canine detection teams for the continuing fight against bed bugs.