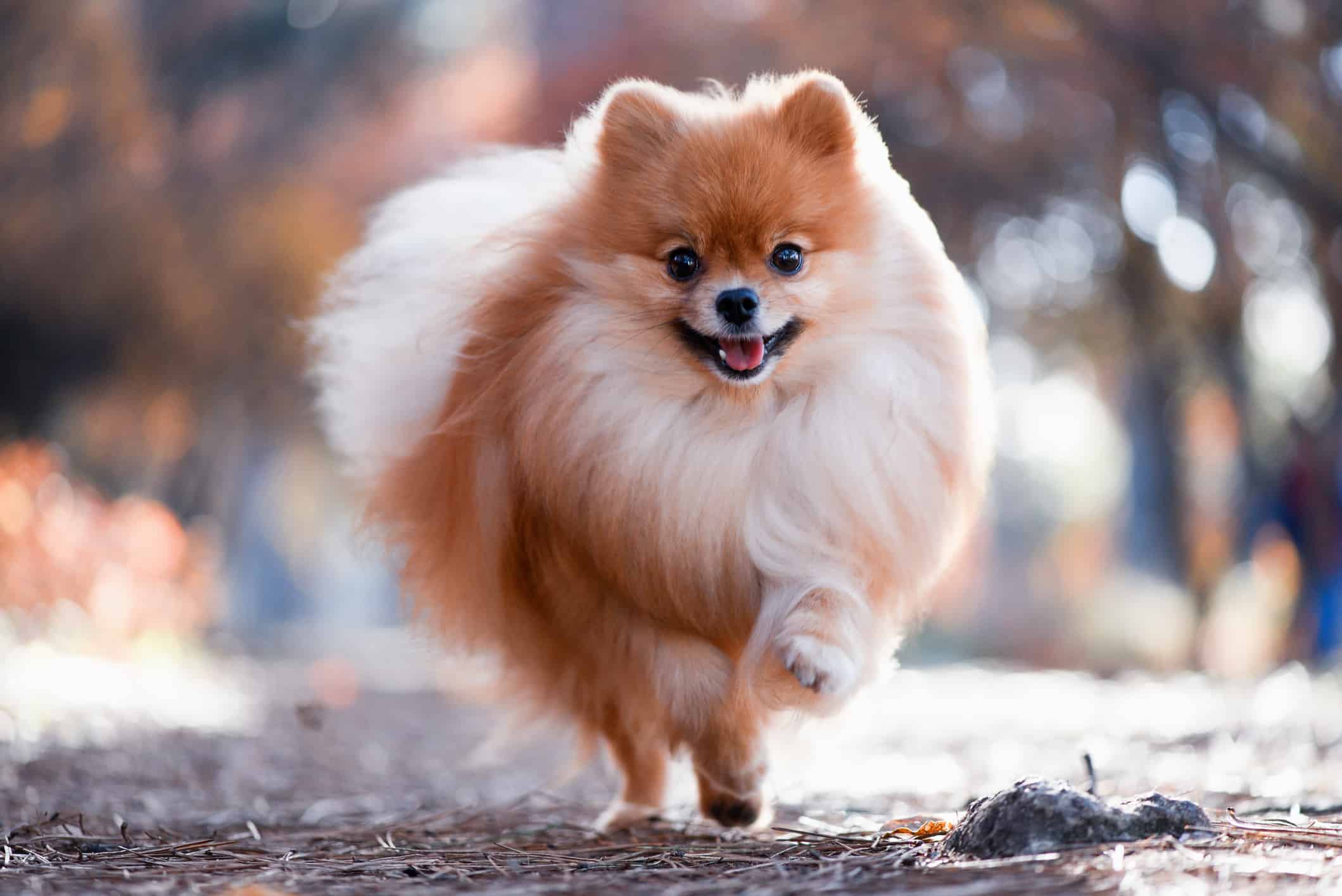 The Pomeranian – popularly known as a Pom or Pom-Pom – is a small companion dog that is a descendant of the larger Spitz dog. The breed’s name is derived from the Pomerania region in north-east Germany and west Poland. Often referred to as Dwarf Spitz (Zwergspitz), Pomeranians are easily recognized by their small size, smiling face, and fluffy coat.

In this article, we will look at the characteristics of the Pomeranian, study the origins of this toy breed, and answer frequently asked questions. 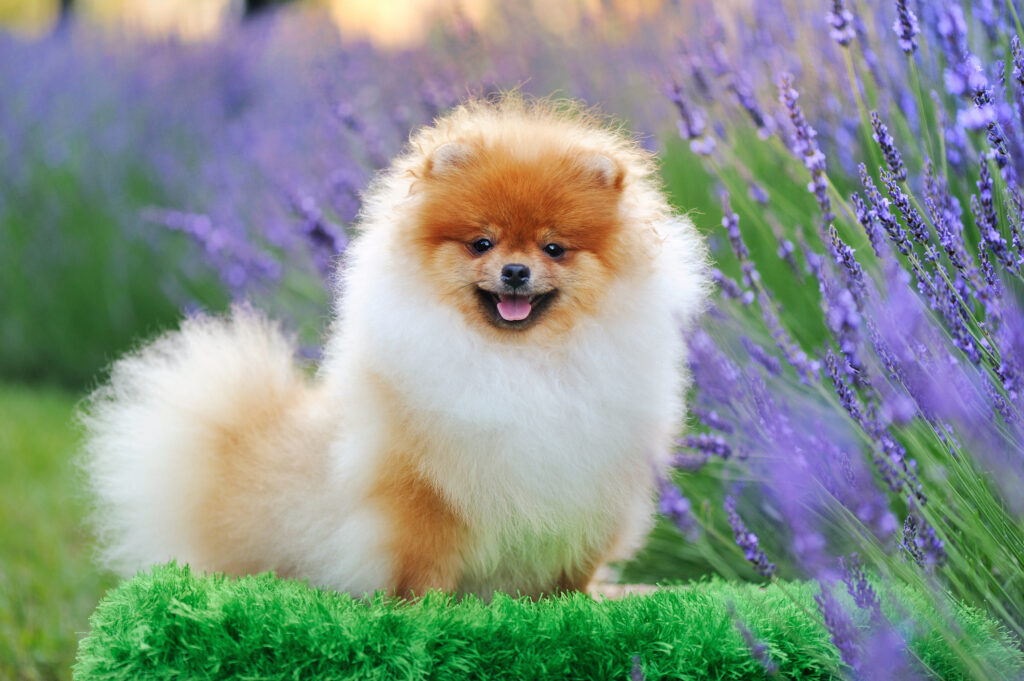 A brief history of the Pomeranian

The biggest change to the breed happened during the lifetime of Queen Victoria, the granddaughter of Queen Charlotte. One of her favored dogs was a red sable Pomeranian who reportedly weighed just 12 pounds. This was very small for a Pomeranian at the time. The dog’s name was Marco, and after it was first exhibited in 1891, the breeders began only selecting the smaller Pomeranians. 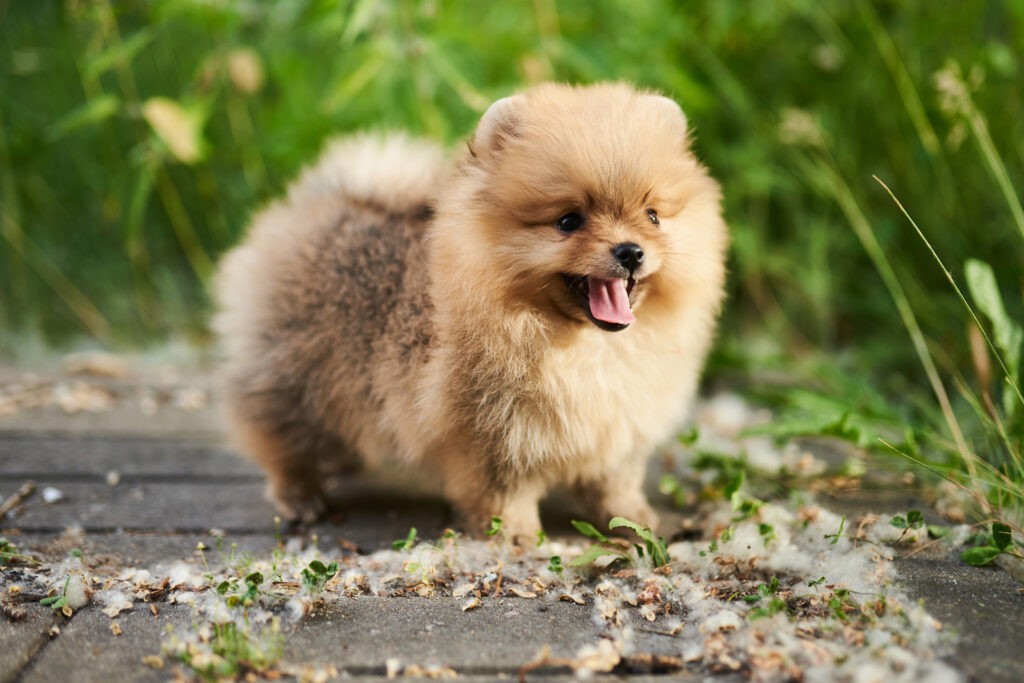 Pomeranians are companion dogs and have fulfilled this role for more than two centuries. Pomeranians are lovely pets that are curious, energetic, and very playful. They are good family pets, but may not be a good choice for families with very active or young children because of their size.

They are very loyal and love their humans, but their affectionate nature also means that they can be clingy at times. Most Pomeranians suffer from separation anxiety. They are companion dogs and want to be with their humans at all times. Early training will help to prevent separation anxiety if the dog accepts the absence of the owner.

Despite their size, Pomeranians are bold and brave dogs. They tend to think that they rule and can get away with anything. It is important to set rules and boundaries with a Pomeranian. This will prevent common behavioral problems like barking. Some Pomeranians can bark or do other unpleasant things to seek attention.

Even though they are a small breed, Pomeranians are very alert and active. They won’t hold back to let you know if anything odd is taking place nearby. If you live an active life and don’t have small children, a Pomeranian can be a great companion dog. They love attention – and if you have enough of it to give a Pomeranian, it can be the perfect pet to have around! 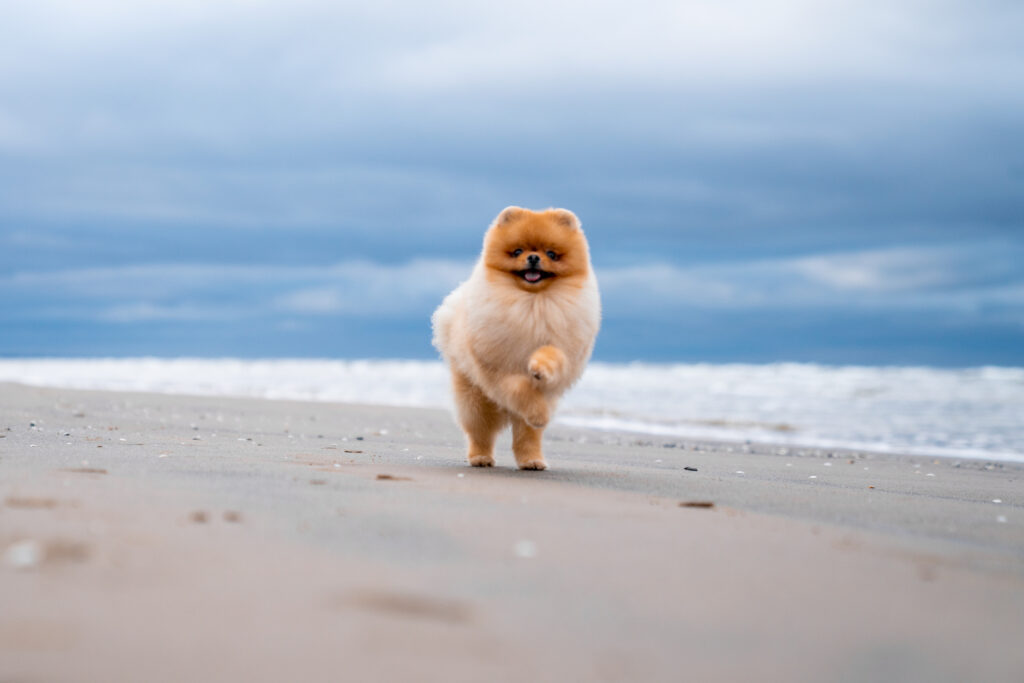 What is the lifespan of a Pomeranian?

A healthy dog breed, the average lifespan of Pomeranians is between 12 and 16 years. Regular visits to the veterinarian, a healthy diet and weight, and daily exercises will help a Pomeranian live longer.

How do you groom a Pomeranian?

Like virtually all dogs, Pomeranians require regular grooming. Their coat should be brushed at least three times a week but brushing daily is highly recommended. When trimming the coat of a Pomeranian, take extra care – the coat will not grow the way it should if it is shaved deeply. If you’re not comfortable with using clippers, use good quality scissors to trim your Pomeranian. Remove excess fur from around the hindquarters, paws, eyes, and shape the dog in areas to maintain the famous fluffy look.

All of the above may seem like hard work, or perhaps you aren’t comfortable with grooming a Pom yourself. If you’re unsure, visiting a professional dog groomer is highly recommended.

How do you bathe a Pomeranian?

Regular bathing is very good for the skin and coat of Pomeranians. Start by brushing the fur to prep the skin and remove the dead shedding hair for the bath. A hypoallergenic pet shampoo is perfect for bathing a Pomeranian. Use warm water to shampoo the dog before rinsing. Preferably, shampoo your dog twice. After shampooing, you can apply a hair conditioner and leave it for a few minutes. Then rinse with warm water to remove the remnants of the conditioner and dry thoroughly with a towel.

How do you make a Pomeranian's hair grow back?

The undercoat of a Pomeranian should never be cut. The fur can grow back after the undercoat is cut, but it will not grow the way it normally would. The hair will grow in odd patches with a wiry texture. This will make the Pomeranian lose its well-known, distinctive fur. The hair of a Pomeranian can grow faster by shampooing the fur once a week – shampoo your Pomeranian to encourage healthy hair growth. Gently massage the fur with dog hair conditioner and rinse off with warm water to remove any conditioner residue. Along with shampooing, daily brushing can help a Pomeranian grow its hair back faster.

How many puppies can a Pomeranian have?

In a litter, Pomeranians can have between 1 to 5 pups. The normal gestation period is about 63 days, but between 55 and 70 days is considered normal.

How much food does a Pomeranian need?